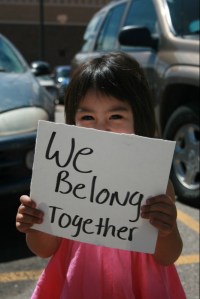 In Christianity we have a fundamental belief that God became flesh–all of who God is entered deeply into the human struggle. We call this mystical act “incarnation”–the Word became Flesh. I have recently been obsessed with the idea of Mutual Incarnation–when an issue takes on flesh and when I am willing to allow all of myself to enter into the struggle illuminated by that incarnated issue. This is a blog about one of those experiences.

I am not trying to hide my perspective on these issues, but debate is not my intent. Rather I am inviting you to explore your own opportunities for mutual incarnation!

A few weeks ago I saw a teenager I have known since she was 6. Let’s call her “G”. It was great to see G after so much time. I was eager to hear about how life in the small town was since she had moved to Greeley from Denver a few years ago. She proceeded to tell me stories of how she made the volleyball team and had so many friends. It sounded like life was pretty good up there. Better in many ways than what I knew she would be experiencing now. But G was still thrilled to be back in Denver, because it meant she could once again live with her mom who had been deported just before G went to live with family in Greeley. The volleyball team, circle of friends, mostly middle class life was great, but it was nothing compared to being able to hug her mom again.

As a Senior in college I decided I needed to be a Democrat. I made that decision mostly as an act of rebellion against my previous, very conservative Republican identification. During that time I decided to take overtly Democrat favored sides on hot button issues. One of those was Immigration. I decided that I would argue for this thing I didn’t really understand called “Immigration Reform”. I decided that anyone who was in favor of building a fence was ignorant and I self-righteously gave myself a pat on the back for posturing correctly.

As I read that paragraph I realize that I find myself in that space often. I put my head in the clouds, debate ‘issues’ with friends and family, and proudly proclaim the ‘right’ way of thinking. In fact, I would say that most of us tend to get stuck in this space. We successfully divide the world up into ‘real life’ and ‘issues’–the latter having very little baring on the former.

Then Nicole and I moved to Denver. In some ways it was our passion for these issues that drove us to come here. What we didn’t expect at all was how quickly the itch for a good debate would subside and make room for a deep burden to do more than talk. Before we knew what hit us, the issue of Immigration had taken on flesh, and it’s name was Ivy, Ada, Juan, Karen, Diana, Daniel, Robert, Arnold, Julissa, Ivan, Gabriel, Sergio, Ivette, Miguel, Victoria, Jose, Marcos, Lizzy, Alex, Angelica, too many more to name, and of course G.

Friends from college would talk to me looking for a debate and I could do nothing but come at them with names. I had suddenly lost all interest in winning an argument. Instead I started watching bills come and go with a list in my head of all my new friends who would directly benefit from it. When it ultimately died I would feel a rock in my chest as I knew it meant there was no new hope for my other friend J, who I was planning to play Pitch with later that night.

One of the most profound moments came when the Incarnation of Immigration turned into an invitation for me to Incarnate myself–to allow all of who I am to enter into the struggle for Immigration Reform. It was one thing to be willing to debate friends, but when friends of ours invited us to join them at a demonstration to urge the President to push Immigration Reform, I felt deeply uncomfortable. I even debated on coming up with some reason why I couldn’t make it. In the end the voices of my undocumented friends won out and we joined them, along with about 2,000 others, chanting “Si Se Puede!” over and over again as it became a declaration of solidarity, connecting me deeply to my friends and the others at the rally whose lives literally depended on the success of this movement.

In the end our presence at the rally was fairly insignificant. Immigration Reform has not yet become a reality. Many of those friends of mine are still struggling to survive and the conversation is still almost exclusively being had at the un-incarnated ‘issue’ level.

What did come out of that rally was an understanding that all of who I was decided to align myself with my friends as we hoped of a brighter future together. There was something transformative about standing there shouting “Si Se Puede!”. It didn’t feel like I was debating anymore, it felt like I was embracing…and being embraced.